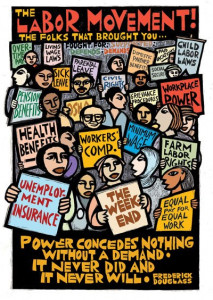 Clayton Morgareidge on what it means to be a worker in a capitalist economy.

On this Labor Day, let’s stop and think a little about what we’re supposed to be celebrating. It’s a national holiday, so perhaps we should start by seeing what the federal Department of Labor says. On its website, we find this:

Labor Day, the first Monday in September, is a creation of the labor movement and is dedicated to the social and economic achievements of American workers. It constitutes a yearly national tribute to the contributions workers have made to the strength, prosperity, and well-being of the nation.

So it’s a celebration of what workers have done for the nation. So who are these workers? According to the Merriam Webster Dictionary, a worker is “a person who does a particular job to earn money.” Now this definition begs some interesting questions that are not asked or answered by the Department of Labor. First, since  the worker is someone who does a job to earn money, he or she is doing it regardless of any desire for the activity or for the results, but essentially for the money.  Why is the worker in the position of needing to work for money? To answer this question, we have to turn to a second question: Who is it that pays the worker money? It would have to be someone who does not need to work to earn money, but instead has money he can use to get others to work. That money is capital, and the owner of that money is the capitalist. So beginning from the very incomplete definition of worker found in the dictionary, we arrive at a definition that involves the worker’s opposite, the capitalist. The reason workers need to work for money is that they have no capital, and they have no capital because capital is privately owned by capitalists. So workers can live only by selling their labor power to the owners of capital. We might further ask, what does the capitalist get by employing workers? The capitalist expects to be able to sell the results of the workers’ labor for more than he has to pay them; in other words, workers produce more value than they receive in exchange for their labor.

So by digging into the meaning of “worker,” we have come upon a bedrock form of social division, dividing our society into two radically unequal classes: those who have no access to the wealth needed to be productive, and those who have a monopoly on that wealth. Workers have no way to live but by selling the hours of their lives to capital. Capitalists have no way to maintain themselves as capitalists but by employing workers who can be made to produce more value than what the capitalist has to pay them.

Now how did society arrive at this division of the world’s wealth between those who have it all – the top tenth of the top one percent—and those who have  nothing except the ability to work? Well consider how Donald Trump got his wealth. According to Samuel Stein writing in Jacobin,

Trump insists that he is a self-made man. Of course, he is not: his wealth came from his father’s theft of labor, taxes, and land. Donald Trump has perfected these methods and accumulated even more wealth. …[His] fortune is triply stolen by wage theft from the workers who build and maintain his projects; tax theft from the state that enables him; and land theft from the common spaces he encloses.

Consider first how he steals from workers:

Donald Trump’s real estate business is premised on profit off of the labor of thousands of workers in construction, maintenance, and services. Each paycheck to each worker represents a small theft, the deduction of a portion of that worker’s compensation for their bosses’ profits. But Trump has built on these everyday pilfers, increasing his fortune through straightforward wage theft.

In order to build Trump Tower, (to take just one example) “his contractor hired two hundred undocumented Polish workers for less than $5.00 an hour to… demolish the asbestos-laden department store that occupied the lot.

They worked twelve hours a day, seven days a week, with no overtime pay. Many of them were not even paid all of their paltry wages, and some did not get paid at all. They sued the contractor and Trump; Trump stalled and denied, until finally settling sixteen years later.

So in addition to the normal capitalist theft from workers that is built into the system, Trump steals from workers by not even paying them their contracted wages. This is very common among capitalists – refusing to pay overtime, forcing workers to work off the clock, restaurant managers stealing tips, and so on. Slavery is another way of stealing the labor from workers; it continues today in many places around the world including in the US.

And we must not forget that the wealth of the US and Great Britain that funded industrial development in the 19th Century was created by labor stolen from people who had themselves been stolen and forced to pick cotton and sugar cane in the American South and the British Caribbean. That was how the unpaid labor of many millions of black slaves contributed, as the Department of Labor puts it, “to the strength, prosperity, and well-being of the nation.” As far as I have heard, we are not celebrating that contribution on Labor Day.

The Jacobin piece by Samuel Stein goes on to detail how the Trumps, father and son, made a practice of shorting the State with tax breaks and subsidies gained by political influence, and of privatizing public space through eminent domain and, again, political cronyism. Just as the Trumps got rich off of public resources, so this capitalist nation acquired its land by appropriating it from its former native residents, exterminating most of them in the process. Howard Zinn tells of how railroad men in the 1800s gave money, shares of stock, and free railroad passes to Congressmen and state legislators and in return got millions in loans and millions of acres on which to lay their rails and which they could use for other profitable purposes. Native villages had been cleared away by the US Army for the convenience white settlers as well as the railroads.

All this, then, is how the working class came to be the class of people dispossessed not only  of the earth’s resources but of the fruits of their own industry, the world they have built, leaving them, leaving us, dependent on the class of owners, the top tenth of the top one percent, to employ us to do whatever work will keep the system running and increasing their wealth. This is nothing to celebrate! In the process, of course, they keep us all fed, clothed, and  housed – or at least those of us who can afford to pay what capital charges for these services. There are workers who do what they love or what they can to make the lives of others better – teachers and nurses, for example. But what we should be celebrating today is the potential of the working class to organize – not just for better pay and conditions of their labor from their employers, but to take back the conditions of their lives, to work for a world in which we own what we do and build and create. The day that the labor movement becomes a people’s movement for such a world will really be a day to celebrate.

Update Required To play the media you will need to either update your browser to a recent version or update your Flash plugin.
Download audio file
Topic tags:
Labor