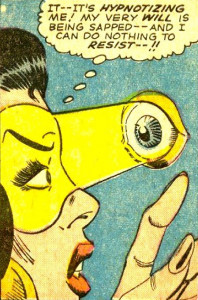 It's the fifth Monday of the month. And that means months are getting longer, no doubt due to global climate change. It also means yet another episode of The Holy Crowley Hour, or Two.

On tonight's show, we explore the program's tag line "Under the influence". At the Holy Crowley Hour (or Two), we're admittedly under the influence of our cult leader, Carl Crowley. We pretty much do what he tells us to do. But you non-cult members shouldn't feel left out. We're sure you also are pretty much doing what you're told to do. By someone or some thing in your life -- partner, parent, political figure, corporate master, religious leader, media mogul, cat. The list goes on.

Our guest is hypnotherapist Sophia LeBlanc, who will discuss the positive aspects of being under the influence. Sophia was devious, uh generous enough to hypnotize me before the show. We'll talk about the session and the results, and whatever else she wants until she snaps her finger. All that and the usual mix of recorded comedy and audio theater, up until midnight when Joe Woods arrives to break the spell.

Update Required To play the media you will need to either update your browser to a recent version or update your Flash plugin.
Topic tags:
Radio Theater, Humor
Genre(s):
Spoken Arts