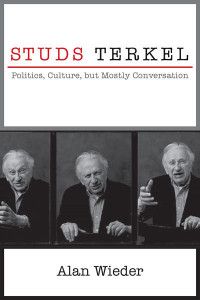 Studs Terkel was an American icon and a leftist who valued human beings over political dogma.  In scores of books and thousands of radio and television broadcasts, Studs paid due attention to “ordinary” human beings of all classes and colors, as they talked about their lives as workers, dreamers, and survivors. Drawing from more than one hundred interviews of people who knew and worked with Studs, Alan Wieder’s Studs Terkel: Politics, Culture, But Mostly Conversation is the first comprehensive book about this man.

Alan Wieder is an oral historian who lives in Portland. He is distinguished professor emeritus at the University of South Carolina and has taught at the University of the Western Cape and Stellenbosch University in South Africa. In the past fifteen years, he has published three books and numerous articles on South Africans who fought against the apartheid regime. The latest book, Ruth First and Joe Slovo in the War Against Apartheid, was published in 2013 by Monthly Review Press.

In the later part of this hour, we'll hear an excerpt from an archival interview with Studs Terkel at KBOO in 1995.

Update Required To play the media you will need to either update your browser to a recent version or update your Flash plugin.
Download audio file
Topic tags:
Activism, History, Media, Race