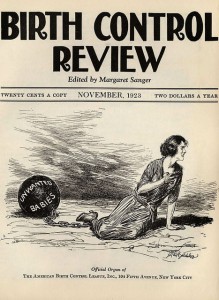 A look at Margaret Sanger, her work and legacy

June 29th marks the hundredth anniversary of Margaret Sanger in Portland for obscenity.  Her so-called crime was teaching about contraception, and distributing her pamphlet Family Limitation.

Sanger was seen as a threat to decency.  Her support of birth control, and the empowerment of women to have say in the number of children they bore, was villified as immoral.  She has been criticized as a supporter of eugenics in the 1920s; often these criticisms are leveled by people who are against contraceptions and family planning.

To note the day, a group of local historians and reproductive justice advocates will be visiting downtown sites, and explaining the history of Sanger's arrest.   and its relevance today.  We will be speaking once again with Judith Arcana, who is a member of that group. Judith is a writer, historian, reproductive rights activist, and Jane,

Join Ani, Lyn, and Judith as they discuss why this case is relevant today.

You can follow along throughout the week @PositiveRevolt on Tumblr

Update Required To play the media you will need to either update your browser to a recent version or update your Flash plugin.
Download audio file
Topic tags:
Sexuality, Gender, Women