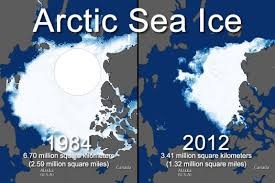 Wadhams, professor of Ocean Physics and head of the Polar Ocean Physics Group at the University of Cambridge, U.K., is the world's foremost Arctic expert. In more ordinary times, he's done his public speaking at conferences, in the lecture hall, or at the occasional press conference announcing some new scientific finding or research. Now he, like fellow physicists, climatologists, systems researchers and other scientists on the cutting edge of understanding climate change, is speaking out with growing alarm at what he's seeing. On June 9, he appeared on the nationally broadcast Thom Hartmann Program, speaking on "An Ice Free Arctic?? A Reality Soon??" (https://www.youtube.com/watch?v=JxwHUADv1QE), which is also the subject of today's show on KBOO. His new book, due out in September, is A Farewell to Ice (https://www.amazon.co.uk/Farewell-Ice-Peter-Wadhams/dp/0241009413).

The Polar ice caps are fundamental components of the earth's complex, yet delicately balanced, climate system. They store vast amounts of water that otherwise would raise sea levels by many meters and flood coastal areas. Their white snow and ice cover reflects the sun's rays back into space (the "albedo effect") and thus moderate the earth's temperature. They keep enormous amounts of methane locked up in permafrost and on the sea bed. All these functions are shifting under increasing climate change, leading to extremely dangerous feedback loops which accelerate the change. A completely ice-free Arctic in the summer hasn't happened in over 100,000 years. When it does, and it could be very soon, it will kick off a whole new round of feedbacks.

We're in uncharted territory and the kind of changes that may well be on the horizon are so consequential that only apocalyptic terminology can do them justice. Unfortunately, they're not science fiction but scientific reality. Professor Wadhams, like abrupt climate change expert Paul Beckwith--a previous guest on Wed. Talk Radio--is convinced that the process is so far along that only large-scale geo-engineering and carbon drawdown projects and technologies have a chance at slowing and partially reversing the course we're on. These are controversial positions, but demand public discussion, along with continued attempts to block fossil fuel infrastructure, shift financing away from fossil fuel industries and other strategies of the climate protection movement.

Other articles and links:

Paul Beckwith video--'Climate System Change, “Too Late” or NOT “Too Late”?'

Update Required To play the media you will need to either update your browser to a recent version or update your Flash plugin.
Download audio file
Topic tags:
Energy/Natural Resources