ONCE THEY WERE HATS: In Search of the Mighty Beaver 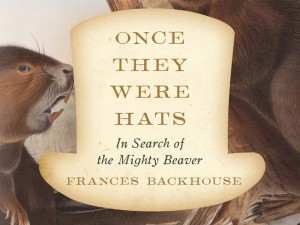 THIS PROGRAM WAS ORIGINALLY BROADCAST ON APRIL 14, 2016

Beavers, those icons of industriousness, have been gnawing down trees, building dams, shaping the land, and creating critical habitat in North America for at least a million years. Once one of the continent’s most ubiquitous mammals, they ranged from the Atlantic to the Pacific, and from the Rio Grande to the edge of the northern tundra. Wherever there was wood and water, there were beavers — 60 million (or more) — and wherever there were beavers, there were intricate natural communities that depended on their activities. Then the European fur traders arrived.

On this episode of Locus Focus we talk with writer Frances Backhouse, author of Once They Were Hats, about humanity’s 15,000-year relationship with Castor canadensis, and the beaver’s even older relationship with North American landscapes and ecosystems. We go on a journey of discovery to find out what happened after we nearly wiped this essential animal off the map, and how we can learn to live with beavers now that they’re returning.

Beavers in the Tualatin Basin is a great place to learn more about beavers and the environment they engineer close to Portland.

The audio from the April program is available here.