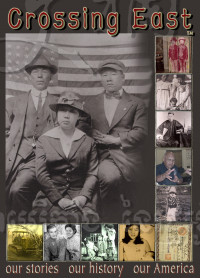 Nearly ten years ago, MediaRites Productions debuted Crossing East, (Our Stories, Our History, Our America), the first and to date only Asian American/Pacific Islander history series on public radio. This series produced by Dmae Roberts, Sara Kolbet and producers around the country aired on 230 public radio stations around the country and is hosted by George Takei and Margaret Cho. To find out more about this series, visit CrossingEast.org.

The winner of the 2006 Peabody Award, Crossing East is eight one hour documentaries on the history of Asian American/Pacific Islander  immigration, from pre-America to post-9/11. More than 50 scholars, producers, musicians and consultants worked on this milestone series over a three years period.

Because of systematic exclusionary laws, Asians immigration has been restricted over the course of America's history; Asians are now a low four percent of the population in America. Though many are third or fourth generation Americans, Asians are viewed as perpetual foreigners and their history has largely been untold.

MediaRites is also embarking on an exciting project to save the 300 hours of oral history recordings gathered for this groundbreaking Peabody Award-winning radio series hosted by George Takei and Margaret Cho. For more info or to order audio downloads of this series visit MediaRites.org.

Our goal is to put all the interviews, transcripts and photos online for the public to use for educational purposes. This act of preservation is called The Crossing East Archive Project.