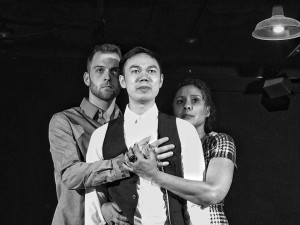 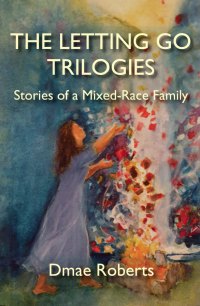 defunkt Theatre presents The Udmurts by David Zellnik + Dmae presents a short radio piece she later turned into a chapter in her new book: "The Letting Go Trilogies."

The Udmurt people are a diminishing ethnic group in the Udmurt Republic in Russia. The lead character in defunkt's production meets an Udmurt woman and is changed by her friendship.

We'll go backstage with co-artistic director and director Andrew Klaus-Vineyard and actor Samson Syharath about their process working together adapting a romantic leading man role into a character who happens to be Asian American. The Udmurts runs May 13- June 18 2016 at at the Back Door Theater in Portland.

And in the latter part of the show, Dmae will play a personal piece called "Memorial" that she later turned into a a chapter of her new book The Letting Go Trilogies: Stories of a Mixed-Race Family traces which four decades of what it means to be a mixed-race adult who sometimes called herself “Secret Asian Woman.”

The memoir is journey through biracial identity, Taiwan, sci-fi, and the trials of her interracial Taiwanese and Oklahoman family amid love, loss and letting go of past regrets and pain. More info: dmaeroberts.com.

You can hear Stage & Studio on:

Reservations are encouraged as space is limited

Nate, a middle-class kid from Florida who has been thrown away by his fundamentalist parents, finds his way to the ramshackle Queens apartment of Mrs. Huff. She is an older, once-glamorous foreign actress, living in exile from a (real) place called Udmurtia, and her tiny apartment holds the mysterious secrets of a vanishing culture.

Nate is torn between his growing devotion to Mrs. Huff and his desire for Clem, a Manhattan child of the “One Percent” who promises Nate a way out of poverty.  A dark, funny, and suspenseful journey, THE UDMURTS explores how we find home – and hope – in a collapsing world.  This is the WORLD PREMIERE of a script honored as an O'Neill Award Finalist from the award winning playwright of Let A Hundred Flowers Bloom.

Saturday, June 14: Talkback with Defunkt: Join The Defunktionals and our fabulous cast for a lively post show discussion of all things Udmurts.

This show features music by Jesse Holt, composer for The Udmurts and music by Aaron Meyer at AaronMeyer.com.

Update Required To play the media you will need to either update your browser to a recent version or update your Flash plugin.
Download audio file
Topic tags:
Arts/Culture, Asian Pacific American, Race
Genre(s):
Arts and Culture