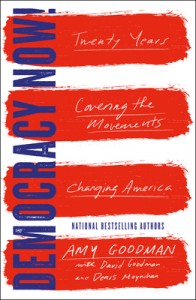 Host Kathleen Stephenson speaks with Amy Goodman, award-winning independent journalist and the executive producer/host of Democracy Now!, the groundbreaking news program which airs on over 1,400 public television and radio stations around the world, and reaches millions more online. This April, Goodman is celebrating the 20th anniversary of Democracy Now! with a new book, DEMOCRACY NOW!: 20 Years Covering the Movements Changing America (Simon&Schuster), co-written with David Goodman and Denis Moynihan.

Amy Goodman is one of the most powerful voices in independent media today. She has won the Right Livelihood Award, widely known as the Alternative Nobel Prize; a lifetime achievement award from Harvard’s Nieman Foundation for Journalism; and the George Polk Award, among others.

DEMOCRACY NOW!: 20 Years Covering the Movements Changing America looks back over the past two decades of Democracy Now! and the powerful movements and charismatic leaders who are re-shaping our world. Goodman takes the reader along as she goes to where the silence is, bringing out voices from the streets of Ferguson, to Staten Island, Wall Street, South Carolina to East Timor—and other places where people are rising up to demand justice. Democracy Now! is the modern day underground railroad of information, bringing stories from the grassroots to a global audience.