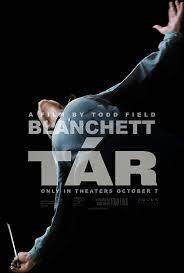 Movie Moles Jan Haaken and Denise Morris talk about the film Tár, a 2022 psychological drama directed by Todd Field and starring Cate Blanchet. The film charts the downfall of fictional composer and conductor Lydia Tár.  Jan and Denise take up the mixed reviews and reactions to the film, particularly in its portrayal of sexual and class politics. They offer their own readings of Tár as a morality tale plotting the rise and fall of a highly ambitious and exploitive woman.

Update Required To play the media you will need to either update your browser to a recent version or update your Flash plugin.
Download audio file
Topic tags:
Arts/Culture, Gender, Film, LGBTQ, Women