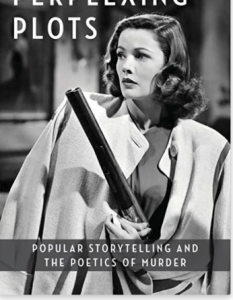 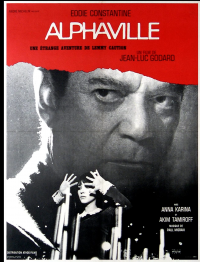 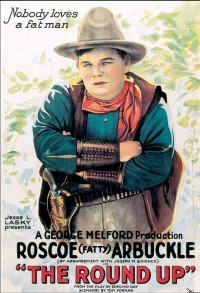 This week, Matthew of KBOO’s bedtime story show Gremlin Time looks at Roscoe "Fatty" Arbuckle's recently restored film The Round Up (1920), while in the book corner, we look at David Bordwell’s new volume on mystery plotting,  Perplexing Plots: Popular Storytelling and the Poetics of Murder, from Columbia University Press, but first, Jeff Godsil celebrates Godard’s Alphaville.

David Bordwell  is one of the most important and successful members of the international community of film scholars. With his wife, Kristen Thompson, he has written the two most assigned textbooks in cinema studies, Film History and Film Art, both in numerous editions (you should collect them all!). On her own, Kristin Thompson has been equally prolific, with a masterwork being Storytelling in the New Hollywood, from Harvard. With Janet Staiger, the pair composed the influential The Classical Hollywood Cinema: Film Style and Mode of Production to 1960.

That last book unveils the core interest of his research: How do movies work, and how do viewers learn to apprehend them? This search has underscored most of his many volumes on Ozu, Dreyer, Hong Kong action cinema, and cinematic poetics.

Lately, he’s been focusing on ’40s Hollywood and changes in its narrative strategies. First was Reinventing Hollywood: How 1940s Filmmakers Changed Movie Storytelling, in which the author tracks the use of flashbacks, voice-over commentary, characters addressing the viewer, multiple versions of the same story’s situations, use of characters' memories, dreams, and hallucinations, the rise of anti-heroes or psychopaths, neurotic heroes, women in peril, and other elements that have come to be associated with film noir. Next came The Rhapsodes: How 1940s Critics Changed American Film Culture, about four ecstatic film journalists, Otis Ferguson, James Agee, Manny Farber, and Parker Tyler. Finally, the trilogy is complete with Perplexing Plots: Popular Storytelling and the Poetics of Murder, recently published by Columbia University Press. Here he tracks the history of the murder mystery and some of its most interesting practitioners in film and novels. Here you will find important accounts of Rex Stout, Patricia Highsmith, Ed McBain, Donald Westlake and his Richard Stark heist novels. He even takes a brief detour to Stephen Sondheim, which makes the unfamiliar reader yearn to learn about the writer-composer.  The book concludes with an analysis of narrative tricks in Tarantino’s films and the rash of “gone girl” novels and movies.

Most of what I've just described constitutes part three of the book. Part one investigates the influence on mysteries of the art novel and formalism, and how those movements inflected and inspired some of the budding novelists of the day, as well as playwrights. Part two focuses on writers such as Agatha Christie, then follows the thread through the psychological thriller, such as Vera Caspary and Laura for example, and the hard boiled gang of Hammett, Chandler and later Ross MacDonald. This is the section that most links the book to the other volumes in this loose trilogy.

“Drawing a bright line between popular narrative and its Other(s) isn’t as useful for my purposes as analyzing congruence and difference along particular dimensions. The task calls to mind Ludwig Wittgenstein’s famous effort to specify the concept of “game”: “a complicated network of sim- ilarities overlapping and criss-crossing.” We can trace threads of this network, find nodes and knots, tease out fine-grained differences. Those analytical discoveries, not gross categorization, can yield the subtlety we should seek. Studying popular narrative through the varying demands of immediate problems and long-range traditions should lead us to expect a lot of blurred boundaries between the esoteric and the exoteric.”

“Thrillers and detective tales, I maintain, were a major way in which popular culture allowed ambitious storytellers to experiment with narrative. A mystery story, because it’s predicated on announcing that there’s something we don’t know, puts the act of storytelling at the center of its concerns. A mystery is defined not by its story world but by something structural: the presence of a “hidden story” that must be brought to light. Matters of form are fundamental to the genre; the how of storytelling is its central convention. Novelty and innovation will come through exploring that convention. Mystery novels are ingenious, Ben Hecht points out, “because they have to be.”’

In tracing his subject, he resurrects some unusual pop culture artifacts, such as Ralph E. Dyar’s 1919 play, A Voice in the Dark, which in a way anticipate Roshomon, Sophie Treadwell’s Eye of the Beholder (1919), and the novel How Like a God, which is told in reverse order and in the second person, published in 1929 to good reviews, and written by a young Rex Stout. There is also the British film The Woman in Question from 1950 and featuring Dirk Bogard, which contrasts the differing views of numerous witnesses involved in the murder. There is even room in the book for comments on Will Eisner, and his comic supplement The Spirit.

The product of a lifetime of wide – ranging reading, the book is also infused with some great quotations.

“A Gothic is a story about a girl who gets a house”summarizes Donald Westlake.

Or Jean Cocteau  noting, “The tactful part of boldness is knowing how far is going too far.” These are among some hundreds of outside quotes

Finally, here is how the author sums up the middle part of the book:

“The 1944 defenders of mystery stories were right to touch on some of narrative’s basic human appeals, such as curiosity. The experimentalism on view in a play such as A Voice in the Dark, a novel such as How Like a God, and a film such as The Woman in Question will often pose questions about crimes completed or about to be committed. For a great deal of all popular storytelling, pleasure in story values is the reward, but the lure is mystery. That lure has inspired storytellers, and it has brought readers and viewers a bonus of enhanced skills in story comprehension. I’ll try to convince you that the traditions of mystery storytelling helped audiences of all brows become more sensitized to the potential of narrative form and style. We learned to like the taste of the construction.”

Again that was from David Bordwell’s latest book, Perplexing Plots: Popular Storytelling and the Poetics of Murder, from Columbia University Press, part of its lengthy and important series of essential film books called FILM AND CULTURE, edited by John Belton.