Are more Black books being challenged? 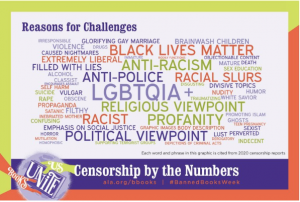 It seems that challenges/banning of Black books is on the upswing.  But, why?

Charles Hannah of Third Eye Books and Lanel Jackson, Black Library Cultural Advocate at Multnomah County Library,  discuss the upsurge in challenges to current and classic Black literature.  They examine reasons for dwindling access to our most important titles.  Examples of targeted books reveal the breadth of these attacks on African American creative expression.

Update Required To play the media you will need to either update your browser to a recent version or update your Flash plugin.
Download audio file
Topic tags:
African American, Arts/Culture, Education, Fiction, History, Race
Genre(s):
Arts and Culture