The Art of the Protest Song 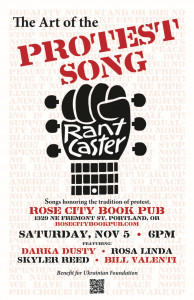 This Saturday, November 5, the Rose City Book Pub in Portland will present the latest iteration of "The Art of the Protest Song," (AOTPS), which celebrates a unique form of music that is both art...and journalism. Throughout history, music, songs and poetry have been powerful vehicles for communication and commentary on the issues and controversies of the day, punctuating major social, cultural and political movements and inspiring listeners to action.
The AOTPS series brins a renewed focus to the art form, combining classic  anthems from our shared history with original songs on contemporary topics. It was started eight years ago by Bill Valenti, and he has produced/performed 27 shows around the country during that time. The last live show was at the Grammy Museum in Newark, NJ in February, 2020, just a week before the covid pandemic shut the world down.
At the Portland event, Valenti will be joined by Ukrainian folksinger Darka Dusty, Rosa Linda and Skyler Reed . It will be a benefit for the Ukrainian Foundation. On today's program, Valenti and Dusty will join host Paul Roland live in the KBOO studios . On Saturday at the Rose City Book Pub (1329 NE Fremont at 6 pm), the program will offer a brief overview and examples of how topical music has impacted--and reflected--social, political and cultural movements in our history, followed by the featured singer-songwriters, who will discuss and perform songs that illustrate the power of music to change the world.
Valenti often introduces himself as a “submerging artist”, having only started songwriting after having escaped to Bend, Oregon 12 years ago with an AARP card in his wallet. His songs are proof that it is never too late to
court the muse. His songs reflect a life of adventures around the globe (20 years living in Europe and Asia). Many of his songs are a form of musical commentary (usually satirical) on the burning issues of the day, and he focuses his more “political” songs on the common ground that crosses over the left/right divide in America.
In 2013, Bill was a Finalist in the Kerrville Folk Festival “New Folk” songwriting contest. He plays guitar, nylon-string banjo, and a mandola named “Nelson”.
https://www.youtube.com/rantcaster
https://www.reverbnation.com/rantcaster
Update Required To play the media you will need to either update your browser to a recent version or update your Flash plugin.
Download audio file
Topic tags:
Activism, Arts/Culture, Government/Politics, Music