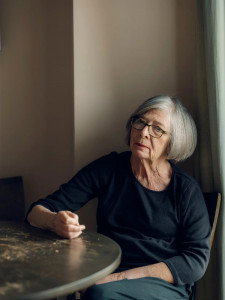 Barbara Ehrenreich was a renowned social critic, journalist, feminist and author. She was born in Butte, Montana and studied chemistry at Reed College in Portland. She later received a Ph.D in cellular immunology at Rockefeller University in New York City. She left a possible career in science and teaching to become a seasoned muckraker (American writers identified with pre-World War I reform and exposé writing) in the tradition of Ida B. Wells and Lincoln Steffens. She wrote many books. Her articles appeared in Ms Magazine, Mother Jones, and The Progressive. She wrote incisively and with compassion about working people and the hardships they endure. In order to write about the underclass, she went underground and took low-wage jobs such as hotel maid, cleaning houses, nursing home aide and waitressing. Through her work she made the invisible working poor visible. She was long active in the DSA, Democratic Socialists of America. In 2012 she founded the Economic Hardship Reporting Project, seeking to place the crisis of poverty and economic insecurity at the center of the national political conversation. Her best-known book, Nickel and Dimed, a classic in social justice literature, has sold millions of copies. She passed away on September 1, 2022. Katha Pollitt of The Nation magazine wrote Barbara accomplished so much, but what we love most about her work is that it was never boilerplate. She always found a way to take her argument to a deeper level. And there was always empathy for the people who are overlooked, whose struggles are disregarded, who have to fight for food and shelter and a halfway decent life, for every shred of dignity and recognition.

Update Required To play the media you will need to either update your browser to a recent version or update your Flash plugin.
Download audio file
Topic tags:
Arts/Culture, Class, Women