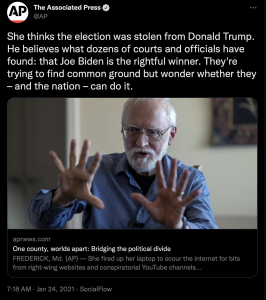 From climate change to armed insurrection, how has the media done? Has it provided more than just the much-derided practice of "bothsideism?" And what role do journalistic norms of objectivity, often interpreted by editors and reporters, giving at least two sides to every story, no matter the if one is based on lies or self-interest and the other on science or facts? Is this “false balance,” feeding the divide in this country by putting unsubstantiated opinions on the same footing as well-established facts? In the case of climate change, a 2020 study found that the practice has lent legitimacy to those who deny climate change, leading readers to believe that denial is “more than a fringe stance.”

The Merriam-Webster dictionary defines "Bothsidesing" as: the media or public figures crediting the other side of a cause, action, or idea to seem fair or only for the sake of argument when the credibility of that side may be unmerited. The term is also used to describe public figures equivocating about a seemingly condemnable action saying that people on both sides are equally responsible for that action.

Update Required To play the media you will need to either update your browser to a recent version or update your Flash plugin.
Download audio file
Topic tags:
Elections, Indigenous, Government/Politics, Civil Rights/Human Rights