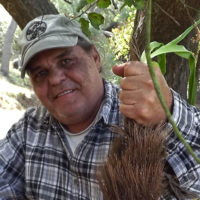 As momentum continues to grow around the Land Back Movement, and Indigenous Stewardship Worldwide, the value of hearing from Elders who have long studied Indigenous traditions and lifeways, whether adopted or of their actual heritage, is a growing imperative. Their lived wisdom is essential, a gift and treasure for future generations, and continues the cycle of dynamic, intergenerational learning in the traditional way. " The way of direct, felt experience and deep listening ".

Hear Payoomkawish Elder Richard Bugbee [indigenousregeneration.org] share insights from his decades of studying the way of plants. He emphasizes the importance of reclaiming our ways of seeing, being and understanding the world by reclaiming Native languages and observing the world more closely. Enjoy provocative insights from an elder who has devoted his lifetime to the study of plants and their uses, the reclamation of language, and the practice of material culture.

Richard Bugbee is Payoomkawish (also known as Paymkawichum Juaneno/Luiseno) from northern San Diego County. Richard has ties with multiple Indigenous nations including the Kumeyaay. He is an Instructor of Kumeyaay Ethnobotany and Ethnoecology at Cuyamaca College, through Kumeyaay Community College [kumeyaaycommunitycollege.com]. He is the Chair of the Board of Directors for the Advocates for Indigenous California Language Survival (AICLS) [aicls.org]. Richard is on the boards of Indigenous Regeneration (MataYuum), Climate Science Alliance, and Inter-Tribal Fire Stewardship.

Richard was the Curator of the Kumeyaay Culture Exhibit at the Southern Indian Health Council, the Associate Director/Curator of the San Diego American Indian Culture Center & Museum, and the Indigenous Education Specialist for the San Diego Museum of Man. He was a member of the Native American Council for California State Parks, California Indian Basketweavers Association ((CIBA), the Land ConVersation, and the Elders Circle for the U.S. Fish and Wildlife Service.

Richard has been learning traditional plant uses of southern California and the Kumeyaay language from Jane Dumas, a Kumeyaay Elder from Jamul Indian Village from 1980 to 2014. He was the ethnobotanist for the Traditional Indian Health Program through Riverside-San Bernardino Indian Health providing information on the interactions between traditional plant and pharmaceutical medicines. He teaches indigenous material cultures and traditional plant uses of southern California at many museums, botanical gardens, and reservations, and is an instructor for summer cultural programs for several Kumeyaay tribes. His goal is to use knowledge to serve as a bridge that connects the wisdom of the Elders with todays youth.

Update Required To play the media you will need to either update your browser to a recent version or update your Flash plugin.
Download audio file
Topic tags:
Activism, Civil Rights/Human Rights, Education, Elders, Indigenous