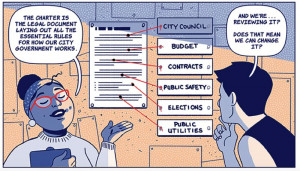 Now that election season is really upon us, it's a good time to take another look at the proposed changes to Portland's city charter, which will be on this November's ballot. These changes will be quite dramatic, not only changing our  city government from a commission to a council form of government, but also introducing district rather than citywide city council seats and ranked choice voting. Opponents of these changes claim that the ballot measure is confusing, suggesting that Portlaners are just not smart enough to understand the mechanics or implications of what these changes will bring. So on this episode of Locus Focus we will clarify the points that might seem confusing and look at how these changes are meant to strengthen the fraying fabric of our community. We talk with Damon Motz-Storey, communications manager for Portland United for Change.

Damon Motz-Storey is a communications strategist with Building Power for Communities of Color, the political affiliate of the Coalition of Communities of Color. In this role, Damon is supporting the campaign to pass the Portland city government charter reform measure that will appear on voters' November 2022 ballot. The measure would allow voters to rank candidates in order of preference, create four city council districts with three council members each, and free up City Council to focus on passing policy and working with their constituents to solve problems while moving management of day-to-day city services and bureaus to a professional city administrator.

Here is an excellent article in the Portland Mercury about the proposed City Charter Changes.

Update Required To play the media you will need to either update your browser to a recent version or update your Flash plugin.
Download audio file
Topic tags:
Activism, Elections, Movement for Racial Justice, Civil Rights/Human Rights, Community Building, Government/Politics