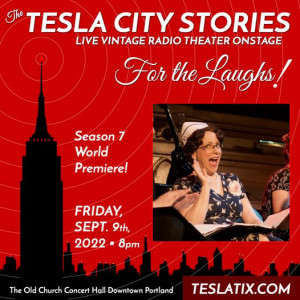 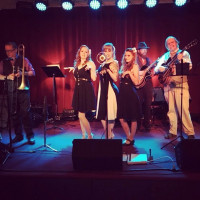 I don’t know how we missed it, but last month, August 20th to be exact, was National Radio Day, a day to celebrate radio and recognize the importance of our medium. So, a bit belatedly, we’ll be making up for that today. Our guests are Jerry Chrisman and Brendan Jones (no relation) of Tesla City Stories, a radio theater troupe here in Portland. Jerry is co-founder and executive producer of Tesla City, and Brendan is their co-founder, director, and chief archivist.

At a Tesla City Stories show, you’ll experience an evening of live radio theater, with scripts from the archives of the little-known Tesla Broadcasting Company, or TBC, a radio network that  operated during the latter years of World War 2, between 1943 and 1945. These scripts include a variety of shows from the Golden Age of Radio – sitcoms, mysteries, thrillers, westerns, and science fiction. And they’re performed live on stage, just as they were back in the old days, complete with music and sound effects.

Tesla City Stories’ 7th season premieres this Friday, September 9th at Portland’s Old Church Concert Hall. We’re fortunate to have Jerry and Brendan here with us to preview the season opener, talk about the TBC, and celebrate the magic of radio and radio theater.