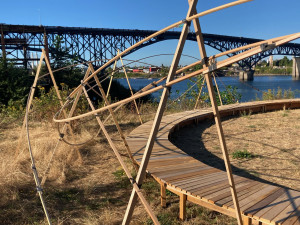 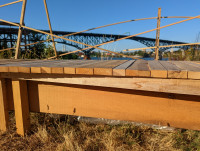 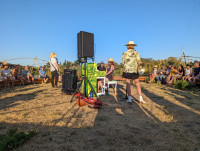 TO the RIver by Philip Krohn and Auxart

On Tuesday, September 6, 2022, Joseph Gallivan interviews Philip Krohn about his sculpture To The River, which is viewable on weekends in Portland’s South Waterfront through Sept 25, 2022. Krohn talks about lashing long strips of wood together with bicycle inner tubes, working with Auxart [PRONOUNCED OX-art] to make a sound sculpture, and turning strips of wood into a vibrating bench that concert audiences can sit on.

From the Portland Tribune:

To The River is a summer-long sculpture, sound art and music residency at Portland’s Zidell Yards. Created by a gathering of artists under the canopy of AUXART, the site opens to the public for six weeks on August 20th. The project site runs for 300 yards from the base of the Oregon Health Sciences University tram to the Willamette River across a former barge-building platform. The sculptural architecture is a matrix of waveforms constructed from long mill-salvaged wood ribs banded together with cast-off bicycle innertubes through which audiences journey to the river. The immersive walk is accompanied by wind activated sound production and culminates in a sculptural sound theater on the promontory overlooking the river. That elliptical seating setting is constructed from salvaged wood that is activated electronically to produce 16 channels of designed sound. The sculptural setting will play host to musical performance works throughout the residency’s public run.

The residency is focused on the way that the Willamette River and rivers in general connect us across geographies, time and ideas about difference through shared networks of sustenance. The work is inspired by the many devotional ways that people go to the river to meet, to cleanse their souls or to start anew. It sits in the acknowledgment that the site was once an aquatic part of the river itself, before decades of industrial uses, including ship dismantling and barge construction, and remediation by the Zidell Family as part of the Oregon DEQ Voluntary Cleanup program.

AUXART is a program of the Charitable Partnership Fund, an Oregon public charity. EIN 931267966