Residential Schools, the Doctrine of Discovery, and the Pope's Apology 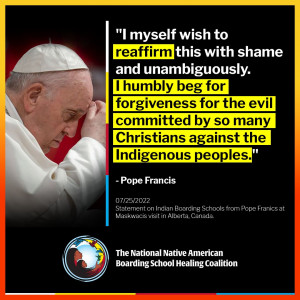 On today's AMERICAN STANDOFF, host Jacqueline Keeler will discuss Pope Francis' recent visit to a First Nations; community in Canada and apology for the trauma and harm of tens of thousands of Native children caused by the Catholic Church in residential schools. We'll discuss why, although a nice gesture, only structural change in the political relationship between occupying colonial governments and Native Nations will protect Native children. And the bedrock of colonial claims to ownership of Native land is the Doctrine of Discovery. This doctrine derives from two Papal Bulls issued by the Vatican in the 15th and 16th centuries. Hence, calls by Native people and organizations for the pope to reject the doctrine and to use his position to call upon colonial governments in the US and Canada from using this as the legal argument for their domination of other nations' homelands.