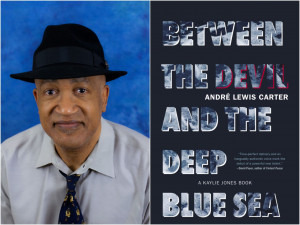 In the early 1970s, César Alvarez enlists in the navy to escape a life of crime; while the decision saves him from the streets, it also lands him amid volatile racial tensions at a crucial moment in US history.

In author Andre Lewis Carter's debut novel, the Vietnam War is raging, the US Navy has only recently begun the process of integration,  and the country is reeling from racial turmoil and unrest.  Youthful César enlists in the Navy to escape from Mr. Mike, a charismatic, sociopathic gangster who was once a mentor but has now turned on him.

Escaping into a navy wrestling with its history of racism and sexism, César  is deployed aboard the USS Kitty Hawk.   Racial tensions are high and the threat of violence is pervasive. Through it all, César is forced  to make decisions demanding a fortitude he never knew he was capable of.

André Lewis Carter is a retired navy veteran who writes fiction, essays, and plays in the urban sprawl of Portland, Oregon. Carter's one-act play, Reaction, was staged at the Last Frontier Theatre Conference in Valdez, Alaska. He holds an MA in fiction writing and an MFA in creative writing from Wilkes University, where he was a Beverly Blakeslee Hiscox Scholar.  Between the Devil and the Deep Blue Sea is his debut novel.

Update Required To play the media you will need to either update your browser to a recent version or update your Flash plugin.
Topic tags:
African American, Arts/Culture, Fiction, History, Immigration, Latino/Hispanic, Race
Genre(s):
Arts and Culture