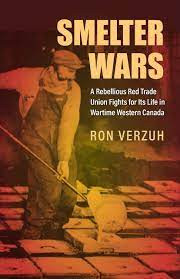 For our regular segment Another World Is Possible, Norm Diamond continues his conversation with Ron Verzuh, author of the just released book, Smelter Wars. The smelter in question is just across the Canadian border along the Columbia River, and the book covers the history of worker organizing there, from company union to Communist-led union to McCarthyism. In this part of the conversation, Norm and Ron talk about the significance of Communist Party leadership in the union, what difference it made, and the dilemmas posed by women workers during World War II. You can read Part One here. Part three will continue in the next episode of AWP with the choices faced historically by the non-Communist left, and different visions of radical and militant unionism.

Update Required To play the media you will need to either update your browser to a recent version or update your Flash plugin.
Download audio file
Topic tags:
Activism, Corporations, History, Labor