The Gap: Deprogramming the Alt-Right from Portland to Buffalo, and Preliminary Primary Results 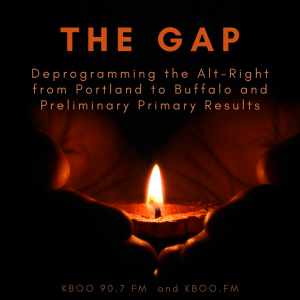 On this episode of the Gap, Tammy and Althea start by talking about the Buffalo hate crime massacre from last weekend and the Portland man who attempted to set fire to two Jewish temples and a local mosque. While all of these attacks seem overwhelming, it’s important to understand that they are connected. The anti-semetic conspiracy fuele both of these events. If our enemies can see our connectivity - when will we? It is important at this point to be kind to yourself and each other. Solidarity! We talk about educating our peers and intervening with young people that can and do get pulled into the alt-right pipeline.

Then, we open up the phone lines to talk with our callers about the preliminary primary election results. Clackamas County is really lagging you guys! Will Kurt Schrader get primaried? Only half of the votes are in since Clackamas County sent out messed up ballots. We also talk about low turnout in mid term primary elections and how local candidates can go far on that small slice of the population.

Thanks so much for listening as always and thanks for supporting KBOO!

Axios - How to deprogram America's extremists

Update Required To play the media you will need to either update your browser to a recent version or update your Flash plugin.
Download audio file
Topic tags:
Elections, Community Building, Women