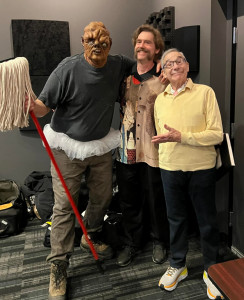 For the past half-century, thousands of film industry crew members and actors have learned the ropes working for Lloyd and his fiercely independent New York studio.  The low-budget movies that Lloyd has directed and produced include Class of Nuke ‘em High, Sergeant Kabukiman, and four different Toxic Avenger movies.  He's distilled his experience into a number of how-to books, including Make Your Own Damn Movie, Sell Your Own Damn Movie, and All I Need to Know About Filmmaking I Learned from The Toxic Avenger.

Lloyd talks with S.W. Conser about his appreciation for B-movies and practical special effects, his family's background in Vaudeville, the "Make Your Own Damn Movie" masterclasses he leads, and his working relationships with such film legends as Oliver Stone, Louis Malle, Trey Parker & Matt Stone, Stan Brakhage, Madonna, John Travolta, and Roger Corman.

The original broadcast version of this episode can be found at this link.

Update Required To play the media you will need to either update your browser to a recent version or update your Flash plugin.
Download audio file
Topic tags:
Arts/Culture, Media, Humor, Film, History, Fiction
Genre(s):
Arts and Culture