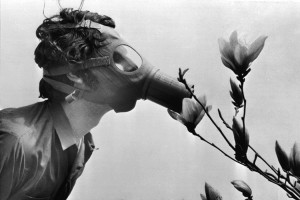 A Pace College student in a gas mask "smells" a magnolia blossom in City Hall Park on Earth Day, April 22, 1970, in New York. Image via Flickr

Patricia Kullberg hosts this Earth Day special on the Old Mole, which includes the following segments:

Indigenous Visions: This Friday, April 22nd is Earth Day, a day of global action which began in 1970 with the emerging environmental movement. The official theme for Earth Day this year is "Invest in the Planet," a phrase that evokes some of the corporate interests that do approach the planet through the lens of their investment portfolios. Alongside the greenwashing and corporatizing of Earth Day, the climate movement has grown to include radical demands and challenges to corporate destruction of the environment. In reclaiming Earth Day, Jan Haaken talks with Grace Dillon, Professor of Indigenous Nations Studies at Portland State University, about Indigenous visions of Earth Day, climate justice and the role of Indigenous Futurisms and Native storytelling in imagining that a better world is indeed both necessary and possible.

Meet Ishmael: Want to have a deeper and better understanding of earth and where it's headed? No better place to start than with a talk with the gorilla, Ishmael, also the name of the novel, reviewed today by Book Mole, Larry Bowlden. It’s a brilliant exploration of history, the philosophy of history and of humans as destroyers of the earth. Though published in its current form in 1992, Daniel Quinn's classic becomes more relevant by the day.

Rural Electric Cooperatives and the Promise of Democracy: Bill Resnick talks to R. K. Upadhya about worker cooperatives, which could provide the left with a way to demonstrate the democratic ideals on which the economy should be run. Bill and R.K. explore this country’s over 900 Rural Electric Cooperatives, which were built to be democratic in that the members voted on the REC’s officers and major expenditures, but were organized and structured to replicate corporate hierarchy. Recently some of these corporate RECs were challenged by member committees seeking to have the REC more involved in climate action. Bill and R. K. discuss how to stimulate worker participation in genuine cooperatives. R. K. Upadhya is an electrical engineer in the energy and resources sector, currently working for an electric utility in Texas. He wrote, “Parliaments of the Earth: The building blocks of the zero-carbon commonwealth are hiding in plain sight,” published in May of 2021 in the online journal, Logic.