No Punishment for Gosar & Greene Speaking at White Supremacist Event? 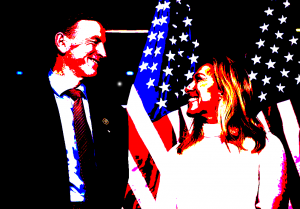 After  Reps. Marjorie Taylor Greene (R-Ga.) and Paul Gosar (R-Ariz.) spoke at the America First Political Action Conference organized by white nationalist "groyper" leader Nick Fuentes House Minority Leader Kevin McCarthy said “There’s no place in our party for any of this. The party should not be associated any time, any place with somebody who is anti-Semitic.... This is unacceptable.”

Yet, what was unacceptable is now being given a pass by the GOP leader and McCarthy told reporters that the duo could get committee assignments back. What does this mean for civil rights in this country? Both Greene and Gosar represent states that have large numbers of BIPOC voters who are facing disenfranchisement by Republican legislators.

Update Required To play the media you will need to either update your browser to a recent version or update your Flash plugin.
Download audio file
Topic tags:
Elections, Civil Rights/Human Rights, Movement for Racial Justice, Government/Politics, Indigenous