The Firesign Theatre "Live at the Magic Mushroom", Part 2 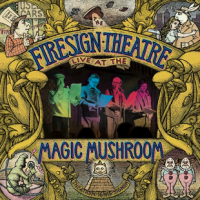 On this special Ides of March episode, we bring you Part 2 of our interview with David Ossman and Philip Proctor of the legendary comedy group the Firesign Theatre, and Firesign archivist Taylor Jessen. We're celebrating both the assassination of Julius Caesar in 44 BC and David, Phil, and Taylor's latest release “The Firesign Theatre Live at the Magic Mushroom".

The new release includes a DVD and booklet, collecting all 12 plays from the Firesign Theatre's performances at the Magic Mushroom in Los Angeles from October 1967 through January 1968. These recordings, which have been unavailable for 50 years, mark the troupe's early days, a period of  intense growth and experimentation. And the shows provided material for several future albums and appearances both on-stage and on the radio.

So please sit back, relax, and lend us your ears!

btw, if you missed Part 1 of the interview, or would like to hear it again, it's available on-demand here: https://kboo.org/media/107923-firesign-theatre-live-magic-mushroom-part-1