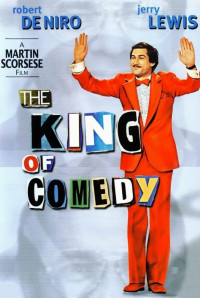 This week on Film at 11, Jeff Godsil revisits Martin Scorsese's The King of Comedy, while matthew of KBOO's Gremlin Time looks a the recent  Black Crab, a Swedish actioner that is as if Ingmar Bergman directed a Liam Neeson film, with some Hans Brinker thrown in. In our book corner, the 50th anniversary of The Godfather is celebrated with the second edition of Jon Lewis's BFI monograph on the film.

The 50th anniversary of Francis Ford Coppola's adaptation of Mario Puzo's novel The Godfather is being celebrated all over the place right now with cover stories on magazines, new video interviews, re–viewings of the movie, restorations, and podcasts. In fact it seems that The Godfather has never been gone, being a conversation piece since its debut in the normally slow month of March of 1972. It was instantly heralded as a classic and there is already a small shelf of books about the film and about Coppola. You can even read Coppola’s own copy of the Puzo novel with his reminders and screen directions and edits.

Oregon State University professor Jon Lewis originally published his BFI monograph in 2010. Now to commemorate the 50th anniversary, the British Film Institute has reissued it with a new foreword. Professor Lewis is the author of several important books, among them a history of cinema, along with individual studies of teen road films and Coppola’s movies from the ’80s.

In the new introduction he brings us up to date about the film’s continual reputation, and recounts how he saw Coppola in person recently at an event in Portland, Oregon, and concludes that "Coppola has made … clear enough in his Godfather trilogy [that] Michael’s success is a tragedy not because he is a gangster, but because time and again his success has come at the expense of a family member: Carlo in the first film, Fredo in the sequel, Mary (played, not incidentally, by Sofia Coppola) in the final installment. In the climax and denouement of The Godfather Michael secures control over a criminal empire by killing his brother-in-law, by shutting his sister and his wife out of the world he has just won. If we are feeling good about his success after the baptism montage, the film’s denouement reminds us of the price he’s paid, of what he’s lost.”

The book’s three chapters focus on how the film plays, how it fits into the context of American gangster films, and what its production says about Hollywood production in the ’70s, among other things.

For example, professor Lewis writes, "Coppola’s film was released four years after the industry adopted the ‘voluntary’ Motion Picture Ratings System. As a result, he had a lot more freedom to explore in a less sentimental way the modern American gangster. Absent the reformist frame and/or the political message that crime finally doesn’t pay, Coppola offers a capitalist parable expansive enough to chronicle a transition from the 30s-era entrepreneurial gangster to a more refined version of the post-war corporate capitalist, from Vito, who is essentially a shake-down artist (making offers one dare not refuse) to his son Michael, who is a takeover artist, a corporate raider who offers to buy out his rivals before he reaches for the heavy artillery.”

He also charts the film as a family succession tale, and also explores mob connections to Hollywood itself.

He reminds us that not everyone reviewer praised the film upon its release, and in fact The Godfather still courts controversy. Just last week, a writer for the New York Daily News called for a ban on the film, and wrote that it is “no Citizen Kane or Casablanca. Rather, it should be placed alongside The Birth of a Nation and Song of the South as cinematic offal we must refuse.”

The best anti-Godfather case was made in Jack Shadoian’s Dreams and Dead Ends, a study of gangster films and film noir originally published in the mid-1970s. His general case against the film is that it is visually static, has no forward narrative momentum, and is ultimately lacking a moral center.

Even if you love The Godfather, as I do, and it is worth reading his compelling case, where he offers a lot of detail about what he thinks is wrong with the film and its sequels. He writes:

“By [the time of] The Godfather (1972), the merging and blurring of the genre’s conflicts evolve into a presentation of a single world. There is no set of major oppositions in conflict. Minor differences aside, the world on the screen is not split according to values or desires. We are given one world—the underworld (supposedly). We have gone from lawful society to those outside the law to the implication that the distinction doesn’t hold or isn’t meaningful to only one world on the screen, and the conflict or opposition that is crucial to the meaning of the film occurs between the audience and the world of the film, not within the film. The world of The Godfather is one unified mini-society in which the conflict of values within that world is less a source of enlightenment than the mixture of emotions evoked by the conflict between our values as against those in the world of the film.”

He seems to associate the film’s stateliness with poor planning or poor production values. On the contrary I find the visual motifs and Michael’s secret planning to be provocative. The visual motives serve as a glue to hold the narrative together, such as how oranges seem to be associated with the planning of murders and at least one death, and how most of the assassinations take place in or around automobiles.

Another example of detailed forethought occurs in the scene about 35 minutes in when enforcer Luca Brazzi goes to a meeting with Bruno Tataglia in a hotel bar. As Brazzi goes through the bar’s door we see etched on a glass pane leaping fish, a foreshadowing of his fate, as he is the character who now famously "sleeps with the fishes."

Professor Lewis indirectly addresses the kind of criticisms found in  the New York Daily News and Professor Shadoian’s remarks in this passage from his forward:

“It has become fashionable (and stupidly so, I think) among contemporary film scholars and buffs to diminish Coppola’s legacy. It is a strange phenomenon really, but it matters less to the director than it would to most any other artist I know of. That Sofia is the more famous Coppola these days is a source of some real happiness for him; that was clear to me that night in Portland. And the tragedy at the heart of The Godfather is that Coppola’s current happiness is of a sort Michael Corleone would never enjoy or understand.“