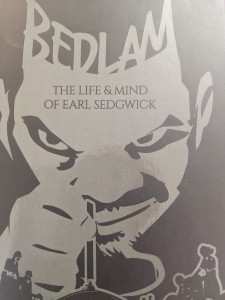 This is the sometimes harrowing, sometimes hilarious tale of a man who inherits the family business: a mental institution.

Bedlam:  The Life & Mind of Earl Sedgwick details the frustrating life of Earl Sedgwick, owner and operator of a mental institution. Earl grew up in the business and subsequently took it over despite his avowed hatred of how the business robbed him of his childhood. He runs on empty until he’s triggered by a visit from his more successful friends, realizing his life has been placed in its own padded room since he took on the family business. The career that is providing everything he has and keeping him alive is ultimately killing him at the same time. Based on a true story, this satirical work shows what happens when an asylum owner becomes a patient.

This is the debut work by author Bobby Spears whose family did, indeed, own a mental institution.  Though not autobiographical, the work is clearly informed by Spears' lived experience.

Bedlam is published by Kingston Imperial.