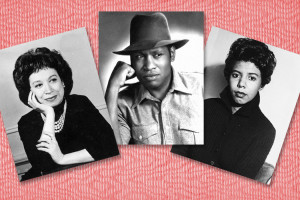 Black artists of music, song, theater, fiction and poetry have a long association with radical left politics.  During the 1940’s and 50s, the socialist sympathies of Black artists like Paul Robeson, Lorraine Hansbury, and Alice Childress turned them into targets of the FBI, leading to gross violations of their civil rights. Sharon Grant reads excerpts from an article by Mohammed Elnaiem entitled: In the McCarthy Era to be Black was to be Red. It was published November 13, 2019 in the JSTOR Daily. Sharon follows up with a reading from another article entitled The Poem that Inspired Radical Black Women to Organize also published in the JSTOR Daily on November 20, 2020, by Ashawnta Jackson. The poem was written by Black actor Beah Richards and she first performed it at the 1950 American People’s Peace Congress.

Update Required To play the media you will need to either update your browser to a recent version or update your Flash plugin.
Download audio file
Topic tags:
Activism, Movement for Racial Justice, African American, Civil Liberties, Government/Politics, Arts/Culture