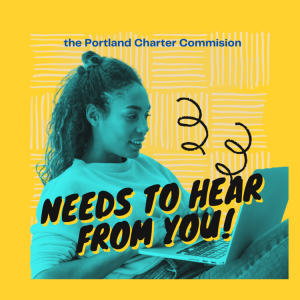 Portland has a form of government that is unique for both major cities, and the modern era. It’s a commission style of government, where the mayor has extra power and all the commissioners are elected in at-large elections, meaning the whole city votes for them. Most other cities abandoned this format a long time ago, and it may be time that Portland does the same.

Every 10 years, the City of Portland has a Charter Review, where the founding document of the city is reexamined and updated if need be. There are two phases, and in the current phase, the Charter Review Commission is asking for input from communities about government and electoral systems.

The Coalition of Communities of Color (CCC) has created a survey for Portlanders to weigh in on how they want to be represented. Changes to the type of government and how people vote have the potential to make Portland more democratic, more representative and more equitable. The Coalition is specifically interested in getting input from historically underrepresented groups, like Portlanders of color, renters, low income folks, LGBTQ+ community members and women.

KBOO's Althea Billings spoke with CCC Civic Engagement Manager Sol Mora to learn more about the Charter Review process, what some of the options in the survey could mean in practice and how Portlanders can chime in. The survey is open through Monday, January 24, 2022 and can be found at bit.ly/charter-survey.

Update Required To play the media you will need to either update your browser to a recent version or update your Flash plugin.
Download audio file
Topic tags:
Elections, Movement for Racial Justice, Community Building, Government/Politics