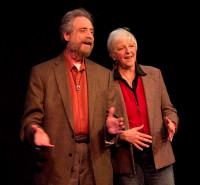 One of our favorite holiday traditions here on Jonesy is watching A Christmas Story, the 1983 movie directed by Bob Clark, who also directed Porky's (1981), another of our holiday favorites.

A Christmas Story is based on the holiday memories of writer and radio monologuist Jean Shepherd, and Shepherd's personal memories of the holiday have now become ours as well. That's the magic of stories -- the most personal ones are often the most universal. Which is a big reason we invited master storytellers Lynne Duddy and Lawrence Howard to guest on our special Christmas Eve Eve episode.

Lynne and Lawrence are the founders of Portland Story Theater, an organization dedicated to the art of personal narrative. Since it's start back in 2004, Portland Story Theater has been presenting live in-person events featuring a diverse group of storytellers and their tales. But the Theater's gone dark during the pandemic, with a return to the stage still uncertain as to when and where. And I for one, miss them.

That's why it's a special holiday treat to have Lynne and Lawrence with us here today. We'll talk with them about Portland Story Theater, what they've been up to during the pandemic, the group's future plans, and the power of story. Then Lynne and Lawrence will each tell their own stories of Christmas past -- Lynne's very spiritual and haunting "Do You Have A Dog?" and Lawrence's not-so-spiritual "The Secret Christmas Tree". about how one Jewish family celebrated, somewhat surreptitiously, the holidays in the suburbs of New York City.

Wishing you all a very happy holiday season, and better and brighter stories of your own in the new year!