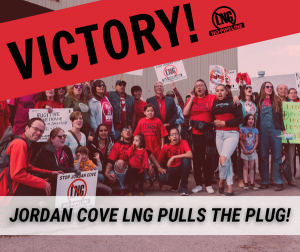 For the past 17 years, people across Southern Oregon have lived with the threat of the Jordan Cove LNG export terminal proposed for Coos Bay, and its companion Pacific Connector Gas Pipeline, a 36” pipeline that would have traversed 230 miles of Southern Oregon. On December 1, after years of community organizing, the Jordan Cove LNG Export Terminal and Fracked Gas Pipeline Project was announced officially dead.

On this episode of Locus Focus, we talk with some key people who led the struggle to protect Oregon from this massive fracked gas project. Allie Rosenbluth is campaigns director with Rogue Climate in Phoenix, Oregon, and Deb Evans and Ron Schaaf are landowners whose property would have been impacted by the pipeline.

Update Required To play the media you will need to either update your browser to a recent version or update your Flash plugin.
Download audio file
Topic tags:
Activism, Community Building, Energy/Natural Resources, Environment/Climate, Government/Politics