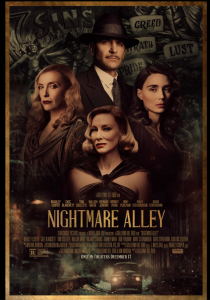 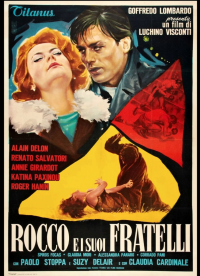 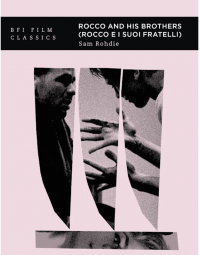 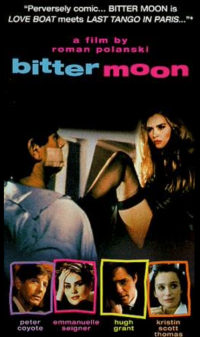 This week we are joined by Stephen Hood to discuss Nightmare Alley, then Jeff Godsil gets to the bottom of Polanski's  Bitter Moon, while Matthew of KBOO's Gremlin Time considers the Marvel TV series Hawkeye, and in the book corner, a new monograph onVisconti's  Rocco and His Brothers.

Despite having many hit films and awards, Luchino Visconti has not been much acknowledged for his contributions to melodrama as an art form.

This is puzzling. The answer probably lies in a critical preference for his early neo-realist films, Obsession, and La Terra Trema. There is much less critical commentary on his later films, which are operatic, epic, and melodramatic, from Senso through The Leopard, the German trilogy that began with The Damned,  and his mostly unseen later films. There is also a critical shrinking from taking melodrama seriously. Though there is a strain of criticism that analyses the designation, surveys the great Hollywood melodramas, traces melodrama theatrically back to before Shakespeare, and argue that melodrama is at the root of popular cinema, Visconti has not partaken of this enthusiasm. And who knows, there may be an anti-gay bias at work as well.

Sam Rohdie has stepped forward to close this gap with his British Film Institute Film Classics monograph on Rocco and his Brothers. Originally punished in 199x, the book is now issued with an up-to-date bibliography essay, a model of its kind.  The film offers the perfect vehicle to wrestle with realism versus melodramatic theatricality in cinema.

Rocco was released in 1960, the same year as La Dolce Vita, which also had a score by Nino Rota,  and L’aventura. Unlike the episodic social satire of Fellini or the withholding abstraction of Antonioni, Rocco was a family saga that chronicled the rise and disintegration of the Parondi family, mid-‘50s immigrants from Sicily to Milan. Unlike the other two films, which were heralded at festivals, Rocco faced censorship problems, production problems, and some ridicule from urban film writers, though the film was popular in rural and provincial towns, where the experiences portrayed in the film were familiar – the prejudice against southern Italians, the dearth of job opportunities, the temptations of crime, prostitution, and the myth of easy cash. Rocco won its share of awards but has never held the exalted position of the other two films.

Rocco is a great film but it has its problems, and Mr. Rohdie’s book is a fine explication of the film’s importance, but it, too, has a few problems. The chapters alternate between production history, background on Visconti, and other film history matters, sources in literature including Dostoyevsky and Thomas Mann, with analyses of Visconti’s relationship with melodrama. This results in a sense of repetition, but at the same time the position on Visconti and the nexus of racism and melodrama is nuanced and at times difficult to find convincing. Here’s an example:

“At the level of ideology Rocco is progressive, but its structures and language seem not to be, or at least that is the problem Visconti’s film poses: is there any relevance now to the forms of operatic melodrama and the historical novel, as lovingly, as accurately reproduced in Rocco as are the streets and bars of Milan, or the bruises to Simone’s face, or the tearing of flesh by a knife? And is there in these forms and in the culture and values they represent something more productive than a lament and nostalgia? Can those values not only point to values lost, but to values to be regained?”

If I understand it, Visconti juggles realism and melodrama to pursue two opposing themes simultaneously, social progressions and the embodiment of old country values and standards. Nostalgia battles modernism. At the same time, modern viewers may find some of the histrionics of the fine cast, including Alain Delon, Annie Girodot, and Claudia Cardinale early in their careers, laughable, just like the strange but old-fashioned choices that they make.

Visconti’s lavish attention to decor, set decoration, gesture, posture, fashion, and so on, use visual style to lament the passing of values swallowed up by the distractions of modern life. It’s kind of a hard concept to get your mind around, and may be true, but the concept is presented with repetition but no progress. It is certainly an appealing defense of Visconti, and he concludes the book by writing,

“Visconti’s work, and Rocco in abundance, is excessively realistic and detailed to the point, repeatedly mentioned in this study, of theatricality since the realism seems so meticulous and overwrought.

The chagrin is the chagrin at an apparently unresolved contradictoriness between realism and melodrama, between what is objective and historical and what is psychic and hysterical.

These doubts and dissatisfactions with Visconti’s works, though they take various forms, always come down to this gap between seemingly incompatible styles and sentiments, for example in Rocco between a realistic political consciousness represented by the flat Giro and the melodramatic excess of the more exciting and attractive and strangely ‘realistic’ theatrical figures of Rocco, Simone, Nadia, Rosaria.

The fact is that the realism in Rocco which bears all the weight of history and the social is a realism to be overcome, in the sense that the real is what all persons must encounter as an objective yet psychic obstacle. The weight of the real must be felt in order for the struggle against it equally to be felt. Hence, and despite all the emphasis in this study on the theatricality of Rocco, the dance and rhythm of its movements, its melodrama and Italian vivacità, in fact the mood of the film is always dark, foreboding, slow and heavy as simultaneously and at considerable length (three hours) the film builds a realism and a melodrama, an objectivity and a psychic distress until they come to their terrible and tragic conclusion, a conclusion akin to an explosion, the bursting forth of pressures which only ‘reality’ in its repressiveness and obdurate power can have induced.”

Despite my criticisms, the book is a must for appreciated Rocco and his Brothers.