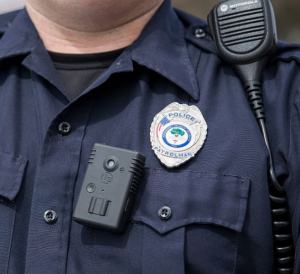 This month, Sam and Jasmin speak with Ardeshir Tabrizian, a journalist currently with the Salem Reporter, and Ellen Osoinach, an attorney with the Reporter's Committee for Freedom of the Press. This is part of our ongoing coverage of Portland's ongoing attempt to establish a body-worn camera ("bodycam") program for the Portland Police Bureau, which has been revived since August 2021 at the insistence of the US Department of Justice as one of several remedies to bring the city back into compliance with a 2014 Settlement Agreement (you can find documents related to the city's attempts at compliance here).

This month's show is focused on the issue of public access to bodycam footage, through the lens of a recent case in Eugene. Earlier this year, Tabrizian, then writing for the Eugene Weekly in conjunction with the Catalyst Journalism Project, wrote the story "A Hidden Death," an investigation of the 2020 death in custody of Landon Payne. The Eugene Police were called by Payne's wife while he was experiencing a serious mental health episode, in an attempt to have him committed. Instead, Payne was arrested on an outstanding civil warrant, and his crisis escalated further. Deputies at the Lane County Jail subdued Payne with a knee to the back, causing cardiac arrest. Despite being revived at the scene, Payne died two days later in the hospital. Tabrizian requested the body camera footage of the arrest of Payne, but was given a curious denial by the department, which essentially stated that Eugene had a blanket policy of not releasing bodycam footage--on its face a violation of Oregon's Public Records Law and the 2015 law creating an exemption for bodycam footage. Attorney Ellen Osoinach with the Reporter's Committee got involved and sent a petition to Lane County District Attorney Patty Perlow contesting the denial and asking Perlow to demand the release of the footage--which she did, in mid-August.

On the show, Tabrizian and Osoinach discuss this story and the process and reasoning behind their petition; the eventual costs of the records; and what people across Oregon and the US can learn from this case. A full version of the interview will be posted shortly.