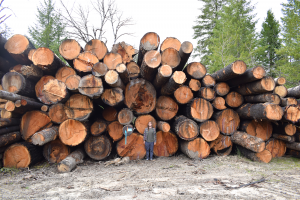 In the wake of 2020’s wildfires, the Willamette and the Umpqua National Forests have proposed hundreds of miles of 200 foot-wide linear clearcuts throughout the forest in the name of “hazard tree removal.” These projects would damage habitat for listed species, impair water quality, and remove large, valuable old trees that could stand for decades to come, providing habitat for a wide variety of fire-dependent species. The Forest Service has as much as admitted these projects are timber grabs, and they want to move fast. But they are being opposed by conservation groups who have engaged in direct actions and filed law suits to stop the logging.

Rebecca White is a native Texan who followed the call of the ancient forests to redwood country where she earned her ecology degree at Humboldt State University. After a stint with the Klamath National Forest, she completed law school and two years of judicial clerkships before moving to Eugene to pursue conservation law. Prior to joining Cascadia Wildland's staff, Rebecca managed the Pacific Wolf Coalition (of which Cascadia Wildlands is a core member) and was active on their WildCAT volunteer team. She works on forest and biodiversity defense with a focus on Western Oregon public lands.

Madeline Cowen hails from the foggy isle of Vashon in the Salish Sea, landing in Eugene to complete their higher education in the use of Geographic Information Systems (GIS) software and Environmental Studies at the University of Oregon. Since the founding of WildCAT (Cascadia Action Team), they have worked tirelessly to build our field-checking capacity, and to bring our fieldwork into the 21st century — integrating the use of GPS applications on smartphones to record important data in the field. They formerly worked with the regional non-profit Firefighters United for Safety, Ethics, and Ecology and has been a life-long activist, working extensively with community-led organizations centered on Environmental Justice.

Update Required To play the media you will need to either update your browser to a recent version or update your Flash plugin.
Download audio file
Topic tags:
Activism, Community Building, Energy/Natural Resources, Environment/Climate, Government/Politics, Law/Court/Crime