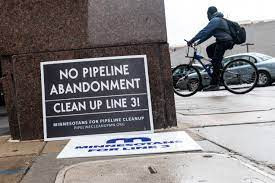 Line 3—History and Hope: Last Monday, on Indigenous Peoples Day, the five-year frontline resistance to Enbridge's Line 3 suffered a defeat. Having finished construction on the pipeline, Enbridge prepared to start pumping the highly toxic tar sands oil from Alberta Canada through critical waterways and Anishinaabe lands in the Midwest. Jan Haaken talks with psychoanalyst and activist Maureen Katz, who spent weeks at the Indigenous-led camps. They discuss the historical importance of the StopLine3 campaign and the scope of state repression of the protests. They also take up the ongoing fight for climate justice, which includes honoring the losses and courage of those on the frontlines as well as sustaining the struggle.

Update Required To play the media you will need to either update your browser to a recent version or update your Flash plugin.
Download audio file
Topic tags:
Activism, Movement for Racial Justice, Energy/Natural Resources, Environment/Climate, Indigenous, History