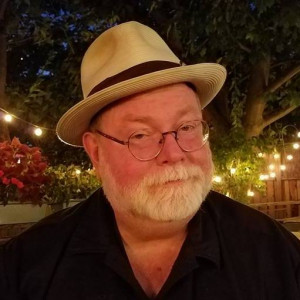 Today's show is the last episode of Mr. Jones’s Neighborhood as a monthly hour-long show. We'll be going to a bi-monthly half-hour show, on the second and fourth Thursdays of the month at 11am, starting October 14th. We'll also be changing the show’s name to Jonesy (one of the nicer nicknames I’ve been given). We have been advised by our legal representatives, who have both been disbarred from practicing law on the radio, to change the name rather than risk litigation from the Fred Rogers estate. Those folks are anything but neighborly.

To mark this special occasion, we're re-airing one of our very first episodes, from September 2017. It features our good friend Sam Mowry, who's currently rehabbing and recovering from recent surgery. Sam is the Artistic Director of Willamette Radio Workshop, one of the top radio theater troupes in the Pacific NW, if not the entire country. He visited KBOO in September 2017 to talk about the Golden Age of Radio, especially the Golden Age of Radio Comedy. Willamette Radio Workshop had just performed "Laugh Your Dial Off", a live on-stage radio theater production, which included episodes from classic shows such as Fibber McGee and Molly, Vic and Sade, Fred Allen and Jack Benny, and Edgar Bergen and Charlie McCarthy.

"Laugh Your Dial Off" was a joint production of the Willamette Radio Workshop and another local radio theater troupe - Re-Imagined Radio. The mastermind behind Re-Imagined Radio – John Barber – joined us by phone from Vancouver, Washington, where he teaches in the Creative Media and Digital Culture Program at the local campus of Washington State University.

Update Required To play the media you will need to either update your browser to a recent version or update your Flash plugin.
Download audio file
Topic tags:
Arts/Culture, Fiction, Humor, Radio Theater
Genre(s):
Arts and Culture, Radio Theatre