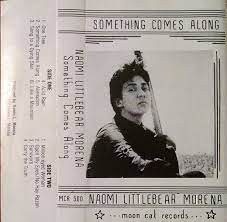 Chelsea Ratzlaff talks with Chicana lesbian musician and writer Naomi Littlebear Morena about climate change and her revisitation of "Song to a Dying Star," as well as the role of art in mental health and community organizing. Naomi's writing is featured in the seminal third-wave feminist anthology This Bridge Called My Back and her protest songs have been adopted internationally. You can view her music video of her song "Survivors" on youtube by clicking the link. Naomi will also be a featured speaker at Washington State University's 2022 Spring Writers Series.

Update Required To play the media you will need to either update your browser to a recent version or update your Flash plugin.
Download audio file
Topic tags:
Arts/Culture, Latino/Hispanic, LGBTQ, Music, Poetry

END_OF_DOCUMENT_TOKEN_TO_BE_REPLACED

Locus Focus
REBROADCAST: Why Hanford Does Not Need Anymore Nukes

Too Much Information with Abe and Traci
Cops out