Art for the Ladylike by Whitney Otto 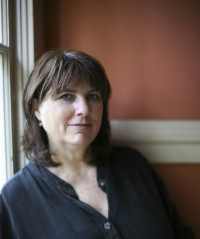 On this special edition of Between the Covers, we talk with Whitney Otto, author of the new book Art for the Ladylike: An Autobiography Through Other Lives, from Ohio State University Press.

Whitney is the author of five novels: How To Make an American Quilt -- a New York Times Best Seller and New York Times Notable Book, adapted into a feature film produced by Steven Spielberg -- Now You See Her, which was nominated for an Oregon Book Award, and optioned for film; The Passion Dream Book, which was a Los Angeles Times bestseller and optioned for film; A Collection of Beauties at the Height of Their Popularity, which was a Multnomah County Library selection; and Eight Girls Taking Pictures, which came out in 2012 and is somewhat of a companion piece to the new book.

Whitney’s novels have been published in fourteen languages, and her work has appeared in anthologies and magazines, as well as the New York Times, The Los Angeles Times, The San Francisco Chronicle and The Oregonian. Her visual art was featured at the Littman & White Galleries here in Portland in 2006.

In the words of Diana Abu-Jaber, Art for the Ladylike is a “fearless, free-range narrative that investigates parenting, class, sexuality, and worlds beyond. Startling, funny, and compassionate, this is an invaluable guide to the life of the mind and the soul of an artist.”

Update Required To play the media you will need to either update your browser to a recent version or update your Flash plugin.
Download audio file
Topic tags:
Arts/Culture, Gender, Sexuality, Women, Family, History
Genre(s):
Arts and Culture