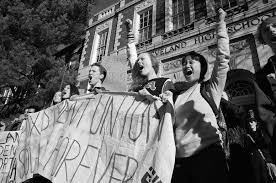 News and views from a socialist-feminist, decolonizing perspective

Coming up on Monday, June 7

In November, Oregon became the first state to legalize the use of psilocybin, the main active ingredient in “magic mushrooms,” for mental health treatment in supervised settings. The field of psychedelic-enhanced therapy has gained particular momentum as a promising approach to symptoms of posttraumatic stress disorder. Denise Morris talks with Jan Haaken, who recently published a book on politics and PTSD, and they take up a little-known history of Timothy Leary’s use of psilocybin in prison settings.

The College for All Act would make tuition free for students with household income under $125,000. It’s reportedly “the most substantial federal investment in higher education in the modern history of the United States,” with “transformative potential… on par with President Lyndon B. Johnson’s Higher Education Act of 1965.” Desiree Hellegers talks about the bill with Sarah Chivers, Ph.D., an intersectional sociologist, and community organizer with Portland State University, Chemeketa Community College, and the Pacific Northwest Inter-Campus Organizing Collective (PICOC) and Marisa Chappell, Ph.D., Associate Professor of History at Oregon State University.  Chappell teaches and writes about US politics, social policy, and social movements,

and is the author of The War on Welfare: Family, Poverty, and Politics in Modern America (University of Pennsylvania Press, 2010) and co-author of Welfare in the United States: A History with Documents (Routledge, 2010)

Bill Resnick talks to an old Portland friend, Patrick Mazza, once editor of the dear departed Portland Alliance, has been front line fighter in the Climate Action movements from the beginning, with two notable arrests in mass direct action, one stopping coal trains, the other for protesting bank finance of fossil fuel companies. He ‘s also coauthored two books: "Stormy Weather: 101 Solutions to Global Climate Change," with Guy Dauncey.  Mazza also wrote--with the well-known Bill Moyers--the book Solutionary Rail on reconstructing transportation. They will discuss what need be done in the next ten years to save the planet, concentrating on some issues that require much more movement discussion, namely

-- How much the movement must shift from an emphasis on demolishing the fossil fuel industry to more on what now can and must be done, for example on demonstrating model zero carbon cities.

--  The relations between the cities and the state and national government and what each must do. Many US cities including Los Angeles are taking over the energy utility and moving to 100% sun and wind energy. But not Portland.

Update Required To play the media you will need to either update your browser to a recent version or update your Flash plugin.
Topic tags:
Activism, Drugs, Environment/Climate, Energy/Natural Resources, Health, Labor, Economy