In Search of Hummingbirds 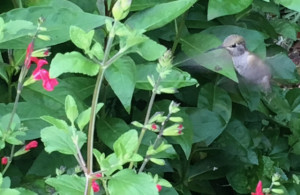 Hummingbirds, with their jewel-like plumage, acrobatic flight, and fearless character, have fascinated us for centuries. For hundreds hese mythic-like creatures have played a central role in the folklore and spirituality of many cultures. But the future of these amazing little spirits is endangered by climate chaos and human development.

On this episode of Locus Focus we talk with nature writer and hummingbird obsessive Jon Dunn, whose new book The Glitter in the Green: In Search of Hummingbirds, describes his journey following the trail of these charismatic birds the full length of their worldwide range, from Alaska to South America.

Jon Dunn is a natural history writer, photographer, and wildlife tour leader. His writing has appeared in a number of magazines, including BBC Wildlife. He is the author of three previous books, including Orchid Summer. He lives on his croft on the remote Shetland Islands.

Update Required To play the media you will need to either update your browser to a recent version or update your Flash plugin.
Download audio file
Topic tags:
Animals, Environment/Climate, History