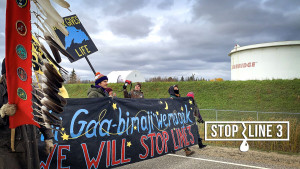 On his first day in office Joe Biden canceled the Keystone XL Pipeline. That was great news. But that’s not the only fossil fuel pipeline that needs to be stopped. Here in Oregon people are still trying to stop for good the nearly dead Pacific Connector Gas Pipeline, while in the Midwest people have been organizing since 2014 to halt Line 3, a proposed pipeline expansion to bring nearly a million barrels of tar sands per day from Alberta, Canada to Superior, Wisconsin.

On this episode of Locus Focus we are joined by Elijah Cetas, with the Braided River Campaign, who recently visited the proposed pipeline site. We talk about why he chose to go and connect with the water protectors in Wisconsin and the links between the struggle to stop Line 3 and the fossil fuel fights here in the Northwest.

Elijah is an organizer and activist from North Portland. In 2018, he completed his bachelors degree at Quest University Canada in the unceded territory of the Squamish Nation. Returning to Portland, Elijah joined the newly founded local chapter of the Sunrise Movement, began organizing against oil trains in Portland with Center for Sustainable Economy, and now works at the intersection of the Superfund Cleanup and building community resilience from North Portland’s fossil fuel infrastructure hub. In 2020, he co-founded the Braided River Campaign to envision a future Portland Harbor on the Willamette River defined by good jobs, clean energy, and healthy ecosystems.

Learn more about Line 3 protests and about local actions you can take with Stop the Money Pipeline.

Update Required To play the media you will need to either update your browser to a recent version or update your Flash plugin.
Download audio file
Topic tags:
Activism, Energy/Natural Resources, Environment/Climate, Government/Politics, Indigenous