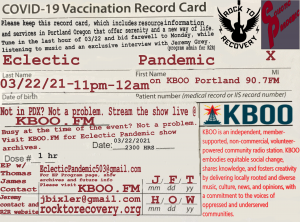 This is an interview and music show with Jeremy Grey (Program Administrator At Rock To Recovery) to get an insight of R2R's adaptation during covid times.

Rock to Recovery helps people heal and transform their lives through the powerful experience of writing, playing, and performing music as a group.

Thomas of Eclectic Pandemic was introduced to Jeremy Grey (R2R and grunge outfit UNDUDE) while utilizing the services at DePaul Treatment Center, a local rehabilitation center locted in Downtown Portland Oregon, and experienced such a fun, unique and memorable moment writing and creating music with Jeremy and the other clients by making an entire song, that there was no doubt that R2R was the perfect topic of EP's first program to be aired on KBOO's airwaves.

After graduating the facility and transitioning into Recovery Mentors Program offered through Central City Concern (A program in which individuals are held accountable for their successes, as well as for their digressions) Thomas received an invitation from one of his mentor's to attend Rock To Recovery's press release that announced R2R's presence in Portland Oregon.

Fourth Dimension Recovery and Depaul Treatment Centers partnered with Rock To Recovery to hold the release and Wes Gear the founder of R2R and former guitarist of Korn and HED PE was present to represent R2R and conduct the making of the song entitled 'Living My Best Life" with all who were in attendence. Thus the medicine that is offered through music that is Rock To Recovery was born in our city of Portland. The event gained news coverage from KATU News Channel 2. here it is

The day after power was restored during the snow and ice outages of 2021 this interview took place based from R2R's adaptation during the pandemic and to get a closer look at the services and programs that developed as a result of social distancing.

What was found that afternoon sipping hot coffee from a Keurig is that now as a direct result of the pandemic, the public can attend classes through R2R's website. There is a free music event every Thursday at 6 pm, a meditation class every Wednsday at 6 pm in which Jeremy leads himself! And a breathwork class every Saturday at 10 am. and so much more!

TUNE IN OR STREAM THIS PROGRAM right here from the Eclectic Pandemic show archives and get on the same wavelength with EP's very first show!

Music chosen by Thomas and song requests chosen by Jeremy featuring Wes Gear's former band HED pe and Jeremy's current band UNDUDE! All songs have a detailed description of what they mean to each one of them that you can find below.

In this interview you can find experience, strength, hope and a new way of living one day at a time. In this case, one hour at a time.

​    1. Soundgarden “Rowing” - I picked this song because not only is SG a lengendary PNW institution of grunge rock and a huge influence, but Chris Cornell had his struggles with addiction, of course, and the lyrics of this one really feel like the pandemic. “Keep on rowing.”

2. UnDude “Any More” - This song was partially written while I was in rehab as a breakup song to my old life, my addiction. With a radio show focused on addiction services and what to do when darkness feels overwhelming, I can’t think of a more fitting airwaves debut.

3. Undude “Limbo Pit (Patience)” - As implied by the title, album Anxiolytic centered around the theme of squeezing out difficult emotions, and hopefully feeling better in the process. Pandemic patience-fatigue is super real right now and screaming always makes me feel better. If you feel like you’re going crazy I hope you know you’re not alone. -Jeremy Grey

2. Botch "Spaim/Japam" - "A house-fire in the town of Roy took the lives of two children. The parents made it out of the single wide trailer home without a scratch. See they were too busy trying to save their crop of Meth that had started the fire. Too busy to get their kids out."

3. Peeping Tom "Mojo (Feat. Rahzel & Dan The Automator)" - As FCC rules are a real thing, I only took a tiny excerpt from this song. I think it glorifies drugs in a way that only addicts could understand.

4. Hank 3 "Satan Is Real" - Satan Is Real - YouTube - Whether Satan is real or not, the truth to me is that the darkness won't give up unless I change everything. Nothing changes until I make change. Change comes from within my higher power.

5. (hed)pe "Jesus Of Nazareth" - This was Wes Gear's band (R2R) And I was a huge fan of them in my younger years. I played this song amongst many others because I think that it relates to the topic of the show. Plus it was fun playing it right after Satan Is Real.

6. TLC "Waterfalls" - Well... Kind of a funny choice right after (hed)pe, but the beat matched so well and transitioned so smoothly that I coulldn't resist. I think that everyone, in one way or another can relate to this song. It was also a dedication to my Mom. I thought I would give her something that she can dig. WHAT! It's Eclectic Pandemic! Y'all don't hear me!

7. Macklemore and Ryan Lewis "St. Ides" - One of my best friends almost passed away in a tragic car accident. Driving to the hospital from Molalla to Portland and back almost every day with my best friend Kamarie, we listened to this song alot saying the *what" part together, laughing a little. So shout out to you Kamie! We have been through alot together over the last 26 years. Love you more than the mystic moon!

Thank you for your attention. Bye

DON'T WORRY! IT"S ONLY A PANDEMIC!