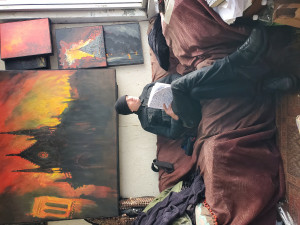 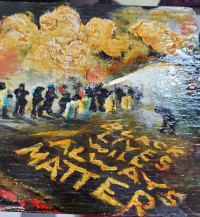 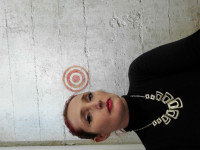 On Tuesday Feb. 23, 2021 at 11:30 a.m. in the third of her pandemic studio visits, Aurora Josephson interviews painter Alex Lilly about his new works depicting the Portland protests of 2020

On Tuesday Feb. 23, 2021 at 11:30 a.m. in the third of her pandemic studio visits, Aurora Josephson interviews painter Alex Lilly about his new works depicting the Portland protests of 2020, as well as his series The Death of the Antiquities. Lilly talks about police brutality, the destruction of art, conspiracy theories, and painting on doors found in dumpsters. He also reads from his poem about the summer’s protests and “One-Six”.

To learn more about Aurora’s series go to www.aurorajosephson.com/pandemic-studio-visits

Shortly after the Berlin Wall fell Alexander R. Lilly was the principal assistant to Jonathan Barofsky at the Berlin Metropolis show held at the Martin Gropius Bow Complex.

A.R.L. Was part of an antiwar art show at Track 16 Gallery within the Bergasmont Station Art Complex, Santa Monica CA. His art was selected for the library of congress permanent collection as part of a 911 Memorial Art Show through a Gallery called Exit Art 2001, NYC. Was part of a group show a Jane Carr Gallery 2007 showed paintings of Oil Well Fire burns and Middle East destruction.

A.R.L. Had a solo Art show at Mark Woolley gallery 2013. A.R.L. Was principal assistant to Jack Tafari for the Dignity Village Houseless Campaign. He also participated in a group show in 2004 for the Center for the Study Of Political Graphics in Los Angeles CA which also houses many of his works in their permanent collection.

Aurora Josephson is a musician and visual artist who currently resides in Portland, Oregon. Building on the foundation of operatic training and a BA and an MFA in Music Performance from Mills College, she has forged a bold vocal style that is uniquely her own. To unleash the limitless range of sonic possibilities in the voice, Josephson employs a variety of extended and unconventional techniques drawn from the worlds of contemporary composition, improvisation, and rock. She has performed and recorded with Alvin Curran, Gianni Gebbia, Henry Kaiser, Joelle Leandre and William Winant, and musical groups Big City Orchestrae, Flying Luttenbachers, The Molecules, ROVA Saxophone Quartet, T.D. Skatchitband and the Merce Cunningham Dance Company.

This show was recorded in February 2021.

END_OF_DOCUMENT_TOKEN_TO_BE_REPLACED

Century Of Lies
Human Rights And The Drug War