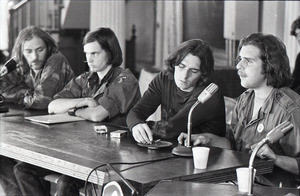 We are coming to you live today for a special episode to mark the 50th anniversary of the Winter Soldier hearings.  We have a great line-up of guests to discuss this with us, to include Greg Daddis, Andrew Basevich, Vince Emanuele, and Jovanni Reyes, alongside our usual Fortress crew of myself, Danny, and Keagan.

The Winter Soldier investigation was a three day summit in Detroit, MI, in February 1971, which brought combat veterans who fought in Vietnam to testify to their personal experiences with atrocities they or their comrades committed, both against enemy combatants and civilians.

The hearings was preceded by the revelations of the My Lai massacre, which unlike Winter Soldier, received major media attention and forced U.S. officials to defend their policies in Vietnam, causing leaders like General Westmoreland, the senior U.S. commander in Vietnam, to refer to My Lai participants as “a few bad apples”, a comment that many veterans of Vietnam found beyond disingenuous and, alongside other dismissals by those in power, compelled them to speak out.

It was organized by members of Vietnam Veterans Against The War (VVAW), with many of the veterans who participated having never spoken of their experiences publicly prior to their testimony, nor were many of them antiwar activists before the inquiry began.  It was filmed by a documentary crew and then turned into a film, which is available on YouTube, for anyone who wants to watch it.

A special thanks to our Patreon honorary producers - Will Ahrens, Fahim Shirazee, James O'Barr, Adam Bellows, Eric Phillips, Paul Appell, Julie Dupris, Thomas Benson,  Janet Hanson, Tristan Oliver, Daniel Fleming, Michael Caron, Zach H, Ren Jacob, Howard Reynolds, Why I am Antiwar, Kenneth Cordasco and the Statist Quo Podcast.  You all are the engine that helps us power the podcast.  Thank you so much!!!