Author Thom Hartmann on his new book The Hidden History of American Oligarchy: Reclaiming Our Democracy from the Ruling Class 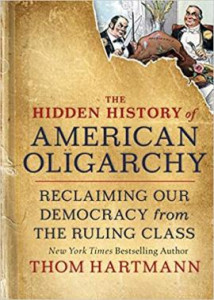 The United States was born in a struggle against the oligarchs of the British aristocracy, and ever since then the history of America has been one of dynamic tension between democracy and oligarchy. And much like the shock of the 1929 crash woke America up to glaring inequality and the ongoing theft of democracy by that generation's oligarchs, the coronavirus pandemic of 2020 has laid bare how extensively oligarchs have looted our nation's economic system, gutted governmental institutions, and stolen the wealth of the former middle class.

That's an idea that progressive talk radio host and author Thom Hartmann explores in his new book, The Hidden History of American Oligarchy: Reclaiming Our Democracy from the Ruling Class. He spoke with KBOO's Jenka Soderberg about the ongoing battle against oligarchy, and how we can win the most recent round.

Hartmann is launching his book virtually with Powell's on February 2nd at 5 p.m. in conversation with David Korten.