The Impending Demise of the World's Largest Methanol Refinery 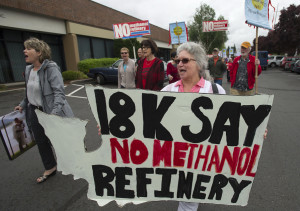 In a remarkable turn of events last week, the Washington State Department of Ecology denied a crucial permit for the world's largest methanol refinery, proposed for Kalama, Washington. People in Kalama have been fighting this methanol refinery for seven years, joined by activists across the region who have written copious comments, testified at innumerable hearings and rallied in Kalama and at the state capitol in Olympia.

On this episode of Locus Focus we talk with Cowlitz County activist Diane Dick and Kate Murphy, community organizer with Columbia Riverkeeper about the next steps to finally put this methanol refinery out of its misery.

Update Required To play the media you will need to either update your browser to a recent version or update your Flash plugin.
Download audio file
Topic tags:
Activism, Community Building, Energy/Natural Resources, Environment/Climate, COVID19