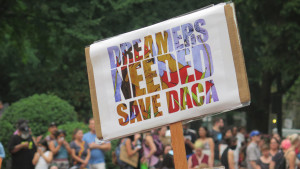 Portland Resistance Calendar is a collection of social justice events in the Portland area, and sometimes, within driving distance. This post is specifically for events that are in the month of November 2017 (and perhaps even later).

Thanks, KBOO members & contributors, for your support. And thanks to Ismoon for research, and Joe Frazier for photos.

This month's photo is from VJ Beauchamp.

Mojada: A Medea in Los Angeles
Portland Center Stage at The Armory

Mojada: A Medea in Los Angeles
7:30pm through Sunday, November 26 at 9pm Portland Center Stage at The Armory

Vote in the November 7 Election! [Portland]
midnight–8pm Portland, OR

Screening: I Am Not Your Negro
6:30–8pm PNCA - Pacific Northwest College of Art, 511 NW Broadway

My People's Market
4:30–8pm The Redd on Salmon Street

No Nestlé in the Gorge!
7–9pm Patagonia Portland, 1106 W Burnside

The Literature of Living Outside: A Lit Crawl Event
6–6:45pm CENTRL Office

Unchaste as a MUTHA at LitCrawl PDX
8–9pm The Big Legrowlski, 812 NW Couch

Get Out screening
3:30–5pm In Other Words Feminist Community Center

Resist! Barsamian on Resistance In the Age of Trump, a benefit for KBOO
7–9pm Clinton Street Theater, SE Clinton & 26th

Challenging Corporate Forestry in OR w/BerniePDX
7–9pm The Watershed

How Can We Fix Oregon’s Addiction Services System?
7–9am Multnomah Athletic Club

A Discussion on Black Trauma, Mental Health, and Self Care
5–6:30pm Portland Center Stage at The Armory

Including Disability in the Equity Conversation
1–4pm YWCA of Greater Portland, 4610 SE Belmont

Stuff The Subie For The Homeless
11am–2pm Burnside Skatepark, 2nd under E Burnside

Give Back to the Gorge
3–7pm Patagonia Portland, 1106 W Burnside

Benefit for Puerto Rico
7–8pm Another Read Through, 3932 N Mississippi

Empowering Women in the Workplace
9–11am YWCA Clark County

Screening of The Story Of Skinhead (With DJs After)
6:30pm Cider Riot, 807 NE Couch

We the Dreamers: An Art Show to Defend DACA
7:30pm through Saturday, December 2 at 3pm Ecotrust, 721 NW 9th

UNITED IN ANGER: A History of Act Up Screening
4:30–6:30pm PICA - Portland Institute for Contemporary Art, 15 NE Hancock at Williams

IntersectFest: a Festival from Artists of Color
6pm through Sunday, December 10 at 11pm Various Locations

Creating the Communities We All Yearn to Live In
6–8:30pm Global Homestead Garage and Shop People, 416 SE Oak