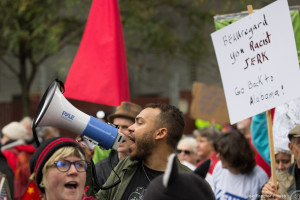 Thanks, KBOO members & contributors, for your support during our membership drive. You can always join or contribute. Clicking on the image below is one way.

Fundraising Dinner to Support Oaxaca After Earthquake Damage - advance RSVP (full disclosure: the owner of the restaurant is a friend of ours)
6:30–10pm Mi Mero Mole, 32 NW 5th

Fight Fire with Fire - a benefit for Friends of the Columbia Gorge
8pm Dante's, 350 W Burnside

The Church's Response to the T in LGBT
7–9pm Southminster Presbyterian Church, Beaverton

Fighting for the Dream Caravan
8am Portland ICE Detention Center,

Women in Prison Conference 2017 (Oregon Justice Resource Center)
8:30am through Sunday, October 22 at 4:30pm University of Oregon in Portland

A Century of Black History in Oregon - Pints from the Past
6:30–8pm Midway Historic Public House, Oregon City

Where We Go Next (The Community Alliance of Tenants)
5:45–8pm Sunrise Center, 18901 E Burnside

Poems of Witness: Speaking the Truth, Going to the Heart
7pm through Sunday, October 29 at 12:30pm Portland

Food for the Soul: a concert benefiting Potluck in the Park
6–10pm Tiffany Center, 1410 SW Morrison

Jeffrey Rosen: The Future of the Supreme Court: Are We at a Tipping Point?”
4–7pm Congregation Beth Israel, 972 NW Flanders

Mojada: A Medea in Los Angeles
7:30pm through Sunday, November 26 at 9pm Portland Center Stage at The Armory